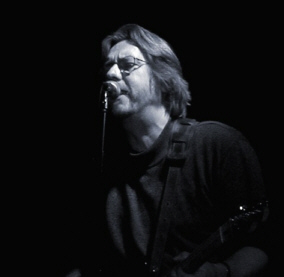 Danish guitarist and vocalist and member of the fine Danish blues bands:

THE BLUE JUNCTION and FRIMER BAND

Frimer began his music career as a sixteen-year-old in Aalborg, Denmark, as a guitarist and bass player in local blues and soul bands. At the age of twenty, he moved to Aarhus to study.

In 1979, Frimer became a member of the Aarhus blues band JENSEN BAND; one of just a few touring blues bands in Denmark at the time. Besides, he played in a Danish folk and blues trio, FBN-TRIO, which toured mainly in Denmark and Finland during 1980-1982.

In 1983, Frimer formed his own blues band, BLUES PICKIN´, and began to compose, inspired by the Texas blues guitarist Albert Collins. Besides touring, BLUES PICKIN´ played every week at a bar in Aarhus: Fatter Eskil. Due to BLUES PICKIN´s many performances there, Fatter Eskil soon became known as a blues bar. In this period, several young blues musicians “sat in” with Frimer and his band at Fatter Eskil, and – in the late 1980´s – some of the best Danish blues bands were put together at Fatter Eskil. A great blues scene was created.

BLUES PICKIN´ played its last gigs in 1987. In 1988, Frimer and bass player Jørgen Nielsen formed the blues quartet, FRIMER BAND, with two new members: Michael Perbøll (keyb.) and Esben Bach (dr.). The band released its first album, Blues Uncovered (live), in 1990. The album became a landmark on the Danish blues map and FRIMER BAND´s reputation crossed the Danish borders. FRIMER BAND continues to perform. The band released its 4th album, Second live, in June 2000. In August 1994, Frimer began to play with three members of one of the Aarhus scenes great blues bands, Shades of Blue: Guitarist Uffe Steen, bass player Morten Brauner and drummer Esben Bach (a former member of Frimer Band), under the name of The Århus Allstars. In 1998 the band released its first album, 22:17 – Live in Aarhus, and adopted the name THE BLUE JUNCTION. The band continues to perform.

Frimer has been inspired mainly by the various blues and soul artists that he has listened to over the years (e.g. Albert Collins, B. B. King, Johnny Winter, Peter Green, Peter Thorup, Otis Redding, Snooks Eaglin and James Brown), but also by country and Tex-Mex artist, such as, The Eagles and Ry Cooder. Today, Ole Frimer is an original vocalist who plays a unique and unorthodox “flesh to strings” style on his Fender Telecaster.

Klick on CDs to see tracks!